I just tried out the Tomb Raider: Legend Demo. It's not an outstanding game (I never thought the TombRaider games have been that great), but nice to play anyway, the puzzles with the physics are ok and Lara is looking sweet as always. 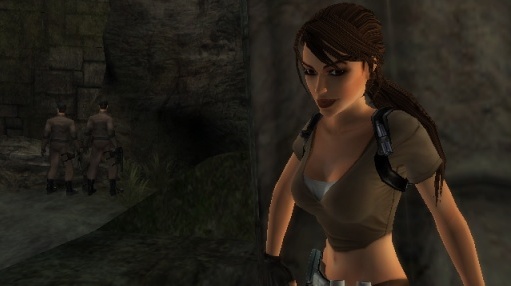 I took the screenshot above right out of the game, it was rendered in realtime. It is not using the latest 3D techniques and - as far as I can tell with my poor programmer eyes - maybe not the greatest artists created the models, but this game is now looking better in realtime than the prerendered movie sequences of the first TombRaider games.

this is not the final release of the demo, in the readme it seys

"For installer size reasons on this demo version, the ‘Next Generation’ graphics option has been de-activated. However please check back after the 7th April 2006 for an update which will unlock all the high-end content and fully optimise the demo to that of the full retail version."
Anthony
Quote
2006-04-06 04:28:00

After playing Oblivion, the graphics for Tomb Raider Legends is a big let down (actually, every other game graphics seem like let down after seeing the gorgeous Oblivion visuals).

I do like the wet-effects after Laura takes a swim. The controls on the PC is horrid. Whereas, the Xbox version's controls are on the spot. Hmm...I wonder why that is? Could it be that they developed for the game with the console in mind?
lug
Quote
2006-04-16 22:08:00

josh -- Well, I caved in and ordered an XBOX 360 controller for my PC. I currently have a USB sidewinder gamepad. It works okay but lacks analog sticks. Once I played street fighter on my xbox using the analog stick instead of the directional pad, I was instantly hooked and have been a fan of analog stick ever since. :)

Unfortunately, I've uninstalled TB from my computer out of frustration. I may re-install it again after I receive my XBOX 360 controller. But I ordered the controller mainly so that I can play Street Fighter using the analog stick with MAME on the PC. ***drools***