I really enjoy programming database applications. I don't know why. I've written a few applications like this until now, and it always was quite fun. I even sometime catch myself thinking of changing industries someday from game development to database development. And my girlfriend tells me that I'm stupid because of that. Maybe I should listen to her, she's a database programmer and Oracle expert and knows what she is talking about.
But it's like that: Games and 3D graphics are cool, but they are just toys. Sure, it may be a lot more work of writing realtime 3d applications, creating cool shaders, debugging network protocols, dealing with sound and physic engines and optimizing code at assembly level, but no one takes you seriously for this. When you are a database programmer, you create software that people need. No one really needs games. And that's a little bit sad.
But for now, as long as I can be a game programmer, I'll keep on doing this. And to make this post a little bit more colorful, here's a screenshot of the database of an application I'm just working on (for university). It's using PostgreSQL 8.0, a really great free database. Try it out, if you haven't yet. MySQL has nothing against it, in my opinion. 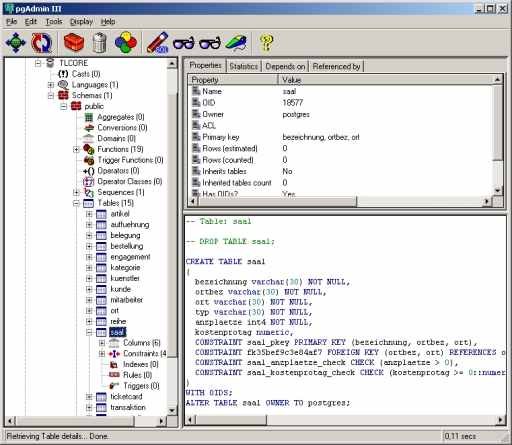 Yes, the cool stuff are things like 3D programming or interesting system and/or network programming, or implementing some new and revolutionary application, that's what computing makes interesting. But unfortunately, most applications can be broken down to a relational database, a few queries and a frontend to it, and while I know how to do database programming, I'm so absolutely bored by it. The cool stuff again begins where you implement some abstraction/persistence layer where you do not have to do anything with SQL but only persist your object using some persistence mechanism (which maps your object 1:1 to a DB table, but handling objects instead of entities is so much more high-level), especially when you want to care about 1:n relations.
ak
Quote
2005-04-26 15:42:00

in a few weeks I will be moving from network administration to programming with my company, and it will predominantly be the sort of database programming you are talking about here. My concern has been that this still wouldn't have enough variety for me, and I would just continue wishing I could do games instead hehe. It sorta strikes me that most database applications consist of a few artfully composed SQL statements, wrapped in a whole heaping glob of GUI interface code. Somehow, to me, that just doesnt match the challenge of 3d programming or games....
buhatkj
Quote
2005-04-26 20:20:00

Programming with Databases, I do this at the lan center I work at. I am writing a program that controls everything from the main server. I am also using Irrlicht for the GUI so I get the best of both worlds.

Niko you should really stay with the game development you have created a great engine and have a bunch of people who really like it. But whatever your choice good luck to ya.
ThaDamnItalian
Quote
2005-04-27 06:23:00

Nobody needs movies, but everyone wants to be a movie star. Do what you love, not what you think other people love. Games are becoming more of a big business anyway. Halo for the PS2 made $125 million (US) during the first 24 hours. Thanks for the GREAT engine; keep up the GREAT work.
Declassified
Quote
2005-04-27 07:32:00

Nobody needs games? While I'm sure that millions of gamers out there would heartily object, I think that this is in fact wrong.
It is common among us computer geeks to actually think like a machine (I know this great big scheme to double the income of our company. The time our employees sleep is wasted. If they would stop sleeping, they could double their work!). The thing is, human productivity is very complex. Personal skills are only part of it. There is also stuff like the working atmosphere or the personal motivation. People tend to be a lot more productive when they are well-rested and motivated. If they hate their jobs, their boss and feel burnt-out, they will not do good work.
Games are a tool to recreate. When playing games, you can keep your mind off things, like your overcrowded business schedule. I know that many people play games to get their minds off things. Without them, their work morale would be way down, I guarantee you that. So you could say that half the workers out there DO need games. The industry needs games, without them, their workers wouldn't do good work.
I know too well that making games is not the most respected job in the world. However, that is not surprising. Don't forget that 15 years ago, we were drooling about how great Dune looked. Computer games are a very, VERY young industry. And an entertainment industry at that. It will take the time until the generation that started playing on their commodore as a kid reaches the age of 50 or 60 before this industry will become fully accepted. However, the video game industry is already bigger than the movie industry. That's a pretty big chance, if you ask me.

You should do what you like. If you like database programming more than game programming, then by all means, go ahead and do it. But don't do it because you think that it might be more respected. What will happen if somebody thinks off some new scheme to store data that is completely different from all modern databases we know today? However, mark my words: As long as humans are around on this planet, they will play games. Not necessarily video games, but they will play games.
TheGolem
Quote
2005-04-28 00:59:00

Yes, in other words games make our lives better. Databases not necessarily, its just something that exists in our world, like bread.
The game industry right now is like the movie industry in the beginning of the century, it wasn't respected and mostly the movies were crap, but we are here to change it.
Maybe you can combine databases with the game engine?
Mike
Quote
2005-04-28 09:31:00

PostgreSQL 8.0 is nice? My experence shows that it does not scale very well. It is free however so I guess you can compare it only to other free ones such as MySQL. I have only worked with MS SQL, Oracle, and PostgreSQL and by far PostgreSWL is the slowest. This becomes apparent especially when your tables get big as in hundreds of millions to billions of records in multitudes of tables. My work had to rewrite several applications for governments and medical centers and when we changes the databases to MS SQL and one to Oracle the speed increase was tremendous.
TSM
Quote
2005-04-28 11:33:00

Ppl do not need games? Well to be honest no one realy needs gold. It just shines nice. Ok, it has some application as excellent conductor nowdays but people often use cooper instead. 99% of gold is in bar, jewelry and coin form. No one knew or cared about its abilities as conductor before late 20th century. But it was used since dawn of time as the most valuable substance in the world. So ppl like something that is rare and shines nice. Do they have right to say that we do not need games? You can earn $$$ from making games, and you can be damn creative, too. Buisness and art, who can ask for more?(ok it is more about buisness and less about art these days but the point is the same) I am suprised that you even care about ppl who do not respect our work. History will remember them as idiots, not us.
Damn, how well I said this.
TheHitchhiker
Quote
2005-04-29 19:15:00