The craziness of developing a WYSIWYG web editor in 2019

I don't earn very much from it (there is a 'Pro' version which you can buy to support development of the editor) but it is enough to continue doing this besides my other projects, and I enjoy that. 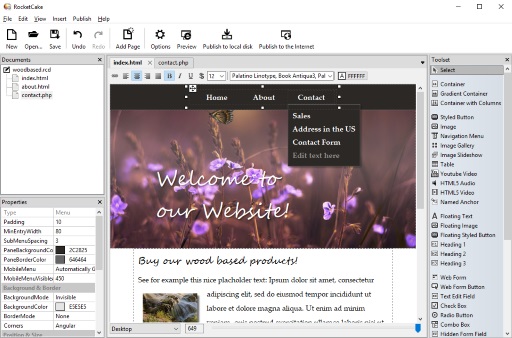 I've learned a ton of unusual things while working on it - like there are still web servers out there choking on double file extensions or browsers on specific unicode characters. I've read and implemented quite a lot parts of the HTML and CSS specifications, and became a fan of the wording "The exact algorithm is not defined" - which today roughly translates to "figure out yourself how Chrome does it and copy that".

But one of the most interesting things is the controversy the editor seems to cause, when people notice that it exists at all. Here are some direct quotes from mails I received in the last 3 years:

"Nobody needs your [swear words here] Rocketacke (sic), I can code HTML myself, thank you!!"

"WYSIWYG editors are for amateurs! Just use Visual Studio Code"

And similar.
What makes this so outstanding is that some people even take the time to write this to me. As if they are somehow personally offended. I'm not sure why.

Of course, and fortunately, there are a lot of people not thinking this way. RocketCake is one of the few pieces of software I created where people send me tons of constructive feedback and friendly feature requests, which makes it pleasant to work on.

It is also very interesting that you have to catch up with the current trends and designs of web development, even if you just create a generic blown up text editor, basically: You need to adjust defaults and templates all the time. People wanted tables with shadows, then gradients everywhere, then rounded corners, then flat stuff (and god-no, no shadows!), then shadows again, but different ones, and giant font sizes with giant line heights. Everytime you make a release with up-to-date defaults, it looks like the next trend is just around the corner.

Together with the game engine I'm developing, this is one of the more challenging pieces of software I've been spending my time with. I know, a WYSIWYG web editor is not the trendiest technology, but as long as it is useful to people, I'm going to continue working on it.

Although it seems to appear crazy to apparently a couple of people.

I still have my Microsoft Frontpage 98' CD. It was a great experience and an easy entry-level way to begin a self taught career in web site programming. I hope you inspire the next generation of web designers.
Adam Done
Quote
2019-06-14 13:32:00

did you really implement your own html/css renderer? why? doesn't wxwindows (or the gui toolkit you use) come with a webkit component you could have used?
horace
Quote
2019-08-24 22:57:00

So if you plan working with RocketCake and CopperCube for times to come, I will give me opportunities with them.
muskafons
Quote
2020-04-07 19:39:00