I just created a Steam page for CopperCube 6 Game engine: 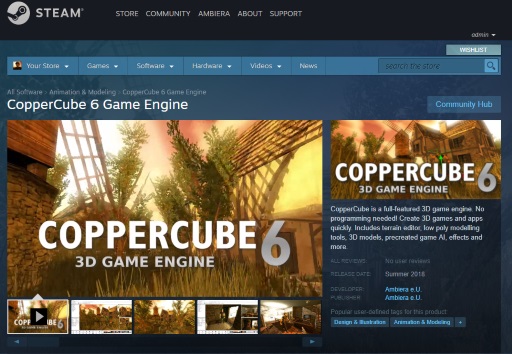 Yes, the next CopperCube update will be a major one, namely version 6. There will be some things in there which I think most users will really like, but as usual, I'm not talking much about this before release. But there will be a nice surprise at least.

If you have a Steam account, it would be cool if you could help and add tags to the CopperCube Steam page, tagging it as "Game Development" and similar. I think this also levels up your Steam account, as far as I understand.

Also, did you see the video I made? (I composed the music for it myself, btw.) It's a bit blurry unfortunately, but I will try to improve it until the release, which will still take a bit of time.

The same rule as always applies about getting Coppercube 5 now: If you buy it now from my website, I give you a free update to CopperCube 6 as well once it is released.
Now excuse me, I have to continue working on CopperCube 6. :)

This will be my favorite gift from 2018!

I finally viewed the eight images on Steam, and picture number five sent shivers into my limbs.

Then I watched the preview video, and I saw a tiny glimpse of a floating vehicle that slowly rotates vertically. The glimpse is cut short, like the mischief of a deviant who shows food to a dying person and quickly hides it away. I feel a yearning now, a yearning that will crush my focus until the day of the arrival.