A while ago I posted a table of ranges of electric cars because I was thinking about buying a new car in the near future. Unfortunately, my old car broke down last week, so I needed a new car much earlier than anticipated.

The problem for me was that I need a car with at least seven seats. As far as I found, there are only two electric cars with this feature:


So I decided to take a step below a full electric vehicle instead and am now driving this hybrid car: 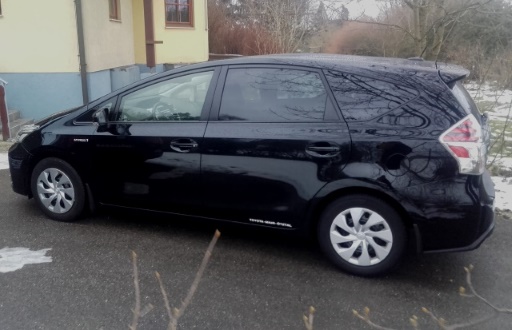 It's a Prius+ (called Prius V in the US) with seven seats (strangely, the US version only has 5 seats). I now drove it for about 500 km and must say that I am positively surprised. It is strange to drive, and you need a bit of time to get used to it, but it is actually very nice and has an unbeatable fuel consumption rate. I like the electric mode especially, with which you can drive short routes silently, without the combustion engine on.
The children also like it very much, they have enough space and the 7 seats give you a lot of flexibility on where to place whom. I never drove a Toyota before, and was surprised by the unusual engineering focused displays (there are 6, in words SIX digital displays in the car, all displaying some different info), but you get used to that quickly.
Looking forward to driving this a bit more, let's see.

Also thinking about getting an electric one, but never considered a hybrid. After having read this, I think I will test drive one, maybe I have to re-think.
Heinz3D
Quote
2018-03-07 06:46:00