Why Developers Can Ignore Software Reviews

If you develop software or games, and sell them, you need to get used to the fact that your software will be be rated. No matter if you are on the Mac App Store, Google Play, Steam, or even your own website, people will comment and rate your software, make videos, blog texts and tweets about it. A lot of times, the feedback and comments you will be getting isn't very positive, sometimes even brutal, destructive and abusing. I'm developing commercial games and game development related software since now more than 20 years, and I've seen a lot of this. Take a look at my latest game, for example here: 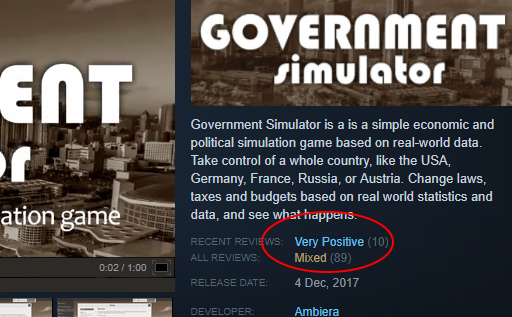 For whatever reason, currently the game is rated "Very Positive", but it has had neary all stages in between already, including "very negative", "negative" and "mixed". And note that the game is available there only for about 6 weeks. People will complain about everything: That the software hasn't feature X, that is has feature X, that it isn't like game Y, or that it is exactly like game Y. The game is great but there is one single thing which the user doesn't like? "Not recommented!"
This isn't limited to this game above (it is just an example), I have this will all of my software.

I personally have the feeling that this phenomenon of extreme polarized reviews hasn't been there all the times, I think that it is a rather recent development. I have no data to back that up, but I think it has started at the same time when people started driving much more aggressive and behaving more reckless in traffic. I also blogged about the obivous behavior change of support requests of my customers during the last 10 years, which feels similar. What the reason for this is? I don't know.

Why you shouldn't care

In order to be able to do your work, you need to develop a thick skin. Especially for introverts like me, this is difficult, but harsh criticism and abusing comments are otherwise very demotivating. But there is also a reson why you shouldn't care: It is not possible to bend your software to the wishes of all the people. Of course, you can try to improve it where possible, but there will be always people not liking it. And additionally the most interesting is this:


Impact on sales has become lower

I've noticed that recently the ratings and software reviews don't seem to have a big influence on the sales numbers anymore. Maybe that's only for my software, but it doesn't seem to matter much anymore if your software for example has 5 stars or 2 stars. The amount of sales doesn't seem to be depending much on this anymore.
Maybe that's because people also know that user ratings aren't very representative? That they contain a lot of garbage? Maybe this could be a factor. But whatever it is, apparently, this isn't that important anymore, so you can at least stop caring that much.

What can be done about it

I'm not sure if this situation of user reviews can or should be fixed. Maybe it could be replaced by a new, or better system. I have no idea.

I will of course still try to improve my software where I can, and look into user feedback as much as possible. But at least I know that a lot of reviews can or even should probably be ignored.

I can only say that I personally do still look at reviews, but generally not just at the star rating, but the actual review text. For a lot of stuff this boils down to skimming over a lot of reviews of either extreme which are nearly incomprehensible or clearly (for me) more advertising than review, and ignoring those - which leaves a few insightful ones.

From those I do often learn a lot about the product - and even if the reviewer didn't like it because of a particular issue it might well be that that issue doesn't bother me, so I disregard the negative rating, and likewise in the opposite direction. It is kind of similar in spirit to reviews in magazines: Often you know they have been paid for, and are therefore favorable, so "reading between the lines" will provide some insight of whether the product is good for me.

Another quite common source of recommendations these days comes from blogs/vlogs of people who in the past have had similar opinions to mine. Not that this works out always, and I did spend a couple of bucks on stuff I found recommended, but don't really use because it didn't fit my needs; but overall it became a good source of information as well.

As to the star ratings I hand out (apart from rating visits to mail boxes on google maps...): I rarely rate products, and try to do it only after using them for a while, but it does happen that I get really dissatisfied with something (like mobile apps deteriorating in functionality over time... or requiring me to use Facebook) and then don't hesitate to give negative ratings.

One thing to keep in mind, specific to Steam, is that the rating system allows only two choices: negative and positive, without middle ground.

Although in the long term, ratings should average, I think this factor subtly influences people in thinking in extremes - therefore, the high polarization.

A lot of times, I would have liked to give a neutral rating, but couldn't, and frequently, the negative rating would prevail, since in the short time, it's easier to remember what annoyed me (eg. crashes) than what pleased me.