I know, I'm old. I prefer old, fast tools which don't use much memory. I'm probably out of the loop. But really, I think it is really difficult to explain this: 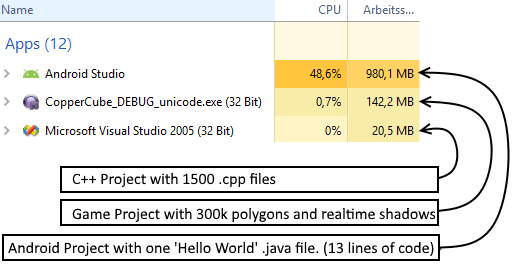 Dear Google, what is wrong with you?

I wouldn't trust the number for Visual Studio, that doesn't sound right according to my experiences.

Anyway, Android Studio is based upon Eclipse, which means it is a JVM application. Now, according to my experience Eclipse can actually use that much memory, but I have also 3 dozen projects open with it constantly and a lot of plugins. What you have to keep in mind with the JVM is that the applications are not actually using the (from the operating system) allocated memory. The JVM does allocate a "largish" chunk of memory as needed and the application uses parts of that...well, that explanation sucks. Have a look at this screenshot from jvisualvm: https://visualvm.github.io/images/visualvm_screenshot.png on the right you see the allocated memory. The orange part is what has been allocated from the operating system by the JVM, and the blue part is what is actually used.

It's not really Google's fault. They just license/use JetBrain's IntelliJ based IDE. They'll probably claim that so much memory is needed to have a good/fast code completition feature, which isn't unreasonable, especially since Android development pulls in a lot of different libraries that require lots of memory to keep track of.

What annoys me more with IntelliJ based IDEs is that they'll use your whole CPU to process source files and there's no option to restrict the usage. Thus other applications will start to lag when you open your IDE.