I want to believe

I used to be an atheist, but now I've found the true church - the church of the fsm. 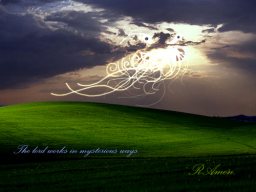 (Yes, in my opinion ID sucks, and I cannot believe people are really that stupid.)

"Our heaven is WAY better. We've got a Stripper Factory AND a Beer Volcano. "

I have one question:
When you see a painting that looks really nice or interesting one would assume someone made that painting not that it just fell into place by itself, correct?

TSM: well, if an unintelligent being cannot comprehend what you're saying then would that being be excluded from intelligent design?
lug
Quote
2005-10-19 04:12:00

TSM: this kind of reasoning is called the "teleological argument", and has been disproven already (although IDers don't accept this, just like they don't accept many concepts of science [like "theory", "proof" and "falsifiability"] and try to get their meanings of all this established).

In my opinion, this argument is just silly, as it shows nothing more than the limitied imagination of the person believing in it. And in the context of religion, this argument is pure decadance, because those who defend it also think that they are wise enough to recognize God's plans in these matters.
ak
Quote
2005-10-19 15:55:00

intelligent design is a concept of ignorance! postulating a higher mysterious intelligence controlling nature = accepting not asking any questions anymore. back to the dark ages! way to go! the mona lisa comparison is laughable...
spaghetti monste
Quote
2005-10-19 16:02:00

I discovered that site a couple weeks ago and since then I am a pastafarian :p.

TSM: There is nothing "intelligent" in our creation and life at all. I suggest you read the book "Selfish Gene" by Richard Dawkins and it will make you think about it. Life is just an ongoing process started by a chemical structure we call genes. What created the universe is another question (and there are certain facts that suggest it was the Flying Spaghetti Monster).
Mike
Quote
2005-10-19 17:34:00

whether there was an intelligent force behind the creation of life or not, calling other people's beliefs "stupid" is not very nice.

plus: the flying spaghetti monster is made of spaghetti, but people invented spaghetti, but the FSM supposedly created people!! Paradox, therefore, not true
QED
:-)
buhatkj
Quote
2005-10-21 23:33:00