As blogged before, I just made the my role playing game Darkness Springs free. Not free-to-play, but free as in beer. And as promised, here are the details about its sales and other stats, before it was made free:

All in all, the game wasn't financially very successful. Which was no surprise, since I was the only developer behind it: I created all client and server code, all graphics, sounds and even the music on my own. Since I'm a better programmer than artist, this resulted in a probably a bit deterrent game :)

In total, only a bit less than 1000 people bought the game over a period of 4 1/2 years. The premium account for the game costed about 9.90 euro, so I earned around 9000 euro with it. Additionally, I earned a bit from the Google Ads running on the games website, but there were also the server costs, so those basically cancelled each other out.

Darkness Springs had about 200.000 'real' players until now. That is, players who played the game that far, so they created an account to save their character(s) and continue playing later. That means only about 0.5% of all players ever bought a premium account. I don't think this is a good value, so I think either the game was too boring for them, or not worth purchasing. Maybe also it was played by people not interested in paying for games at all. Not sure about that.

Although I tried various different marketing techniques during the last years, sales steadily declined over time, but I think this is a natural process. Here is a graph showing this: 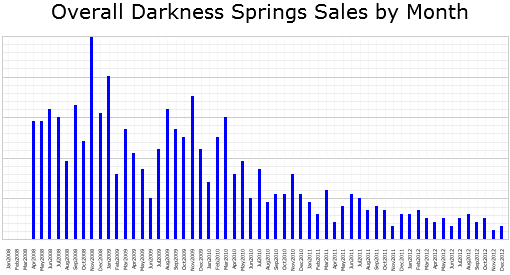 I invested about 3 months of fulltime development into the game. I learned a lot while writing code, rendering 3d graphics, creating the website and the php server scripts. For a european developer, and judging by the time invested, the income the game made was ok after 4 1/2 years, but definitely not very exciting. Should I start creating a game again, I would definitely choose one with much simpler mechanics. An RPG really is a bit complicated to do for one single person :)

If you haven't yet, you can play the full game here.

I think you have a particular problem with indie RPGS. When you start playing any RPG it's hard to care about the world, it's only when you've played for a while and invested time into it that you care about "What's over that next hill" or getting that upgrade. You have to play for an hour or two before you really feel committed to a game and want to finish it or play more.

A free trial of this kind of game can work against it. You download it, play for 15 minutes and think "mmm generic town, generic monsters." Because it's free to try you don't feel bad about playing for 15 minutes and then never looking again. If you buy something like Skyrim you are going to spend an hour or two at least playing it simply because you paid money for it. And by then you _care_ about the world enough to want to see the next town or be able to make a new item, or defeat something you couldn't defeat before.

I don't see an alternative to a free trial :( But for games like this I can see how they work against you because as they are free people don't invest enough time in playing it to feel involved in the world...
JB
Quote
2013-04-24 14:32:00

it`s a pitty... but understandable, game can be improved in many ways... may be it should be set not in fantasy world but in some sci-fi/abstract setting since such settings with mediocre art style looks better

Thx a lot for sharing these details.

IMO 9000€ for 3 months of work isn't that bad. What I find most interesting is the profitable long tail the stats show. Usually games make most of their revenue in the first few days or weeks after release. Therefore they have to be "released" over and over, e.g. in bundles or "pay what you want" sales actions. DS does not seem to have had this problem.
hermitC
Quote
2013-04-25 17:56:00