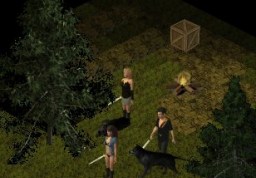 Do you remember, about 5 years ago, when I developed this Flash role playing game? I made a lot of blog posts about it here. Since then, a lot has happened. People were playing the game, and some even purchased it (yay!). I added an editor to it, to make it possible for players to create their own stories and quests, and had to close it down again after half a year because it was abused by Nazis and other strange people to spread their political statements and claims.
The game wasn't a very big success, but it made a bit money at least, and in bad months at least paid the server it was running on. :) A lot of people were playing that game (I can blog some details if you are interested), and were having much fun. I received a lot of "thanks for that great game" mails, and this was already a nice reward.
Anyway, yesterday, I decided that this has been enough now, and made the game free. Not free-to-play, really free. There is no premium account, no in-game purchases, nothing in that direction. You can play the full game without limitations to the end. Try and start Darkness Springs, if you like. And have much fun :)

I would be extremely interested in any numbers you could share. I have always regarded Darkness Springs as the best online game that I could possibly develop myself
Johnny
Quote
2013-04-12 16:32:00

Hi Niko, I'm Codel from China. You must be very good at Irrlicht,I got a question about Texture to ask you .If I have created a box in the irrlicht,can I texture each face of the box with different four images?
I would appreciate if you could give me some advise.
Codel
Quote
2013-04-13 15:07:00