My Encounter with The Walking Dead

I'm used to buy games as physical copies, and carry them home, to install them there. It just feels nice. But today, this has become nearly senseless, because after you installed a game from disk, the DRM stuff kicks in, and you usually have to download a patch anyway, which sometimes is as big as the game itself. So I'm late to the party: A few weeks ago, I purchased my first computer game entirely as digital download, from the internet (via Steam, in particular). The game I bought was The Walking Dead, and boy, this was a good choice.
The Walking dead is the game adaption of the The Walking Dead comic book series and probably better known from the The Walking Dead TV series. I watched the TV series. It is entertaining but unfortunately not particularly good: Bad script with bad dialogs. But it's a Zombie TV series, with lots of undead, crossbows and people trying to survive. It's good for this alone! The wife and I watched Season 2 nearly only in anticipation of seeing the disliked characters die. Yes, we basically sided with the Zombies. :) 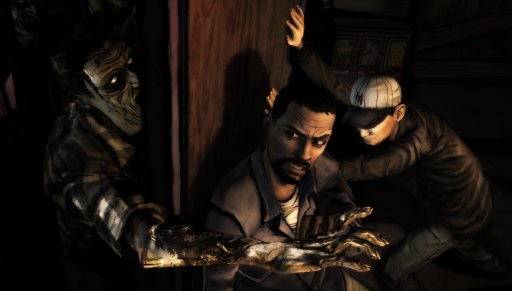 But this blog post is about the "The Walking Dead" computer game by Telltale Games: It is great! It's a kind of adventure, although it's more like an interactive movie. It's really fun, the choices you make are interesting, the characters are believable and you can play it casually, as needed if you have a fulltime job. The game is devided in 5 episodes which you play through one after each other. Because of this, it feels a bit like watching a TV series when playing. One episode lasts for about between 1 and 2 hours (I think), so you get enough of entertainment for 24 euros. I only had a bit trouble starting the game on Windows 8, but the problem disappeared by itself, I guess there was a patch which fixed this problem. So I really can recommend getting the game. It really deserved all the "game of the year" awards it received. Get it if you don't have it yet.