Currently, everybody is talking about the revolution: 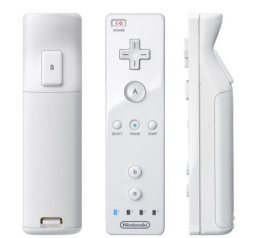 I like it. Sounds quite clever, and if it works as they say it could really be a revolution. And even if not: At least really everybody is talking about it. Clever, nintendo.

Wow, that's awesome.
Can't wait to get my hands on them :)

is it just me, or does it sort of resemble something apple might make? i just thought that was odd. I always figured nintendo would make it like purple or blue or something, not that sort of "apple white"
buhatkj
Quote
2005-09-16 22:48:00

It's not original. Why does Nintendo brag about it? There's already been gun controls like this for years and pointing devices for PCs. Nothing new here. What would be interesting is eye motion control.
winter
Quote
2005-09-17 10:52:00

It's original for a console controller. Quite clever they made it as casual as it can possibly be. Everybody knows how to handle a remote control.
tiv
Quote
2005-09-17 11:28:00