I just uploaded CopperCube in version 3.5, which is a major step forward: It finally includes unicode support, long awaited by many users. The update is free, just download it here. I also improved the user interface with new and bigger icons, as discussed on this blog before, thanks for the suggestions, this was really helpful. CopperCube 3.5 now looks like this: 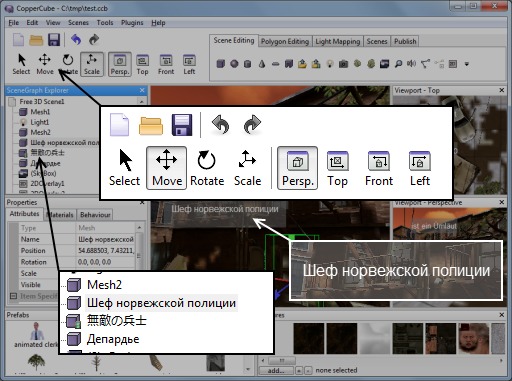 While rewriting much of the source to support unicode, I also updated the UI to wxWidgets 2.9. The guys at wxWidgets really do a great job developing that library, and the 2.9 version includes some great features. It had one small shortcoming, though: At startup, it sets the global C locale to the user setting, causing all string formatting functions such as printf() to use the locale of the user. Meaning that if you are running a german Windows for example, all floats will be printed and read for example as "1,3" instead of "1.3", causing a lot of strange results, including file parsers and window position serialization code not to work anymore. This problem was really difficult to find and caused a lot of headaches. If you run across the same problem, do the following: In your wxApp, overwrite the "virtual wxAppTraits* CreateTraits()" function to create your own object, implementing wxGUIAppTraits, which overrides the function "virtual void SetLocale()" to do nothing at all. That will help.
But appart from that, everything went really nice, and I hope this release will be liked.