A few months ago, I told everyone my opinion about the facebook share: I think it would be worthless in at least a few years. Reasons: All people in favor of buying Facebook shares anticipated a big growth. But where should that thing grow to? All people and their mum are already registered there. Also: remember MySpace? Orkut? StudiVZ? All social networks in the past died a quick death, and most people even don't remember those names!
The facebook chart currently looks like this: 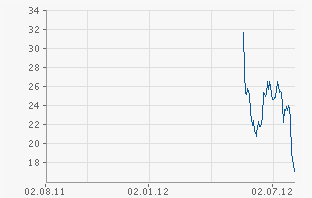 Uh, what a surprise. :) It looks like it will go down even faster than I thought: Some companies claim that 80% of the clicks on Facebook ads seem to be generated by bots. So this trend maybe even accelerates now. I advertise a bit on the internet, but never tried Facebook ads myself. Because people were rumoring that ads on there were totally ineffective. Looks like they were right. Maybe this was the reason for it?

It appears, from a purely consumer point of view, that Facebook is trying to change this. Over just the past few days, I've been seeing pieces of sponsored links showing up on Facebook pages despite Adblock Plus being installed.
Richard
Quote
2012-08-02 14:24:00

Huh... Really interesting article. Do you think this decline will be replaced with growth in a different social network, something to sort of fill the gap? Perhaps Google Plus even?
Kota Weaver
Quote
2012-08-02 15:05:00

Well, I think ads embedded in, e.g. google searches, work, because people are actually looking for something. If you search for something and there is an add for it, some people might actually think "let's check this out". (Especially people who don't know it's an add yet)

Facebook is not a search engine or an online shop. People log into Facebook, because they want to communicate with friends. They aren't looking for something and they definitely don't log in, because they intend to buy something. Companies that placed the ads in the first place perhaps couldn't think of that, maybe even thought that they need to invest more money into the ads as it failed and so all the people at Facebook see is a growing stream of revenues, came up with the idea of selling stocks, you know the rest of the story...

I suspect certain kind of advertisment might work well on FB. For example I don't think there is another side where you can so easily target people in your own town. On facebook people there are many people giving away that information. That kind of local information was the only advertisment on FB that really attracted my own attention so far. Or for dating-sites the single-status is probably useful information.
CuteAlien
Quote
2012-08-15 12:57:00