I am currently working on a new feature for CopperCube: Vertex colors. More and more people are using the editor, and although it was intended to be used for creating games and short game style demos, it is now also used by other people, with other demands. It seems to be a common way to do stuff is to download free 3d models from the internet, and place them into your 3D scene in order to create something. The problem: 3D Models used for other things than games usually are a bit different. They are huge and definately not low-poly, and usually use colors instead of texture mappings. CopperCube does work with those models as well, but not as nice as it could. Currently, vertex colors are simply ignored, resulting in all such models appearing to be white only, and there are artifacts when importing huge files. But with the next free update, CopperCube should also be able to handle all this: 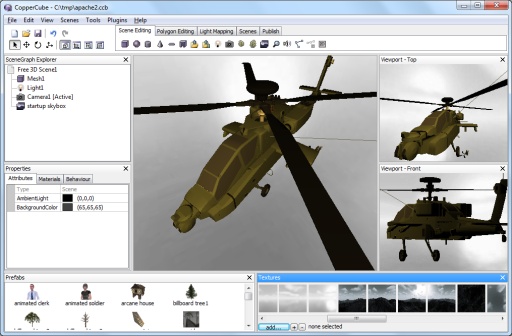 The model you see above is an Apache Longbow, consisting of 27MB (!!) of geometry data, and no textures as material. I've extended the WebGL and Flash target renderers as well to be able to handle this easily. And doing this, espesially extending all the materials isn't exactly a small task. There are about 18 material paths (like solid, transparent, reflective, with and without static lighting, with and without dynamic lighting etc) in CopperCube, and 5 render targets (D3D8, D3D9, OpenGL, WebGL, Stage3D), making together a whole of 90 combinations to check. 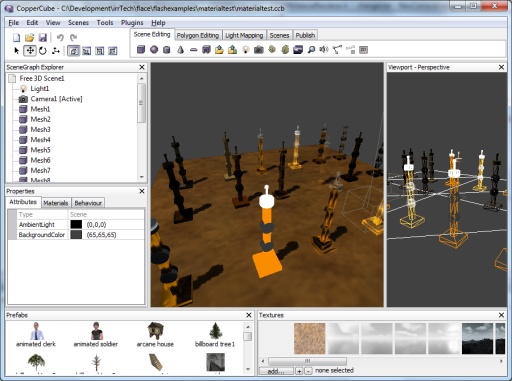 The shot above shows my test case scene which I use to see if all materials still work. Looks good for now. :)
I hope this next update will be available already next week, but let's see.