For us programmers, the world is constantly moving. It is quite usual that a technology you know to work with will stop being used in two years for now. So it is always a good idea to try something new. I have the habit of learning at least one new programming language every year, and also trying out a few new technologies from time to time. Last weekend, I tried out Android. And now that I've played a bit with it, I'm quite surprised what nice development platform Google created for this. You only have to download and install Eclipse, get the Android SDK and an Android plugin for Eclipse, and then you are able to start writing code and create Android applications. It looked like this for me: 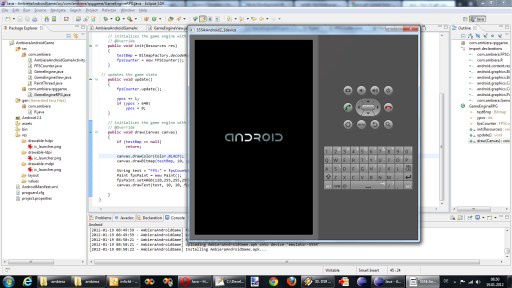 In the center, you see a big emulated android device. The emulator itself is quite a bit slow, which is not very helpful for developing games, but fortunately, you can simply connect your cell phone to your PC, hit 'run' or 'debug' in Eclipse, and your app will instantly run on your real device. Which works surprisingly well.

I think if I have some time, I'll try to create a small game for Android and publish it. I've heard that nobody really buys apps in the android world, but let's see. I'll keep you updated on this small side project at this blog. :)

no, not dart. the other one.

I also found it really easy to get started with Android, much less messing about than with iOS or Symbian.

I find Java ugly and bloated compared to nicer languages, but it does work well on the Android platform. With all the multi-threading for UI and IO you need something that has good native threading support, it also scales pretty well with project size, the larger your project is the better the code to bloat ratio, that bloat seems to fade into code organization. I suppose that's the point of it!
Gaz
Quote
2012-02-09 22:02:00