On Starcraft II, how it works, and about me failing at it

One PC game I've been playing from time to time since about one year is Starcraft 2. There are many quite fascinating aspects of this game which I like: For example the now huge international Starcraft 2 scene with all the tournaments and pro gamers. Every day it's possible to watch new, interesting commentated games between professional gamers, and interestingly, that's much more entertaining than watching for example a plain old sports event like football. 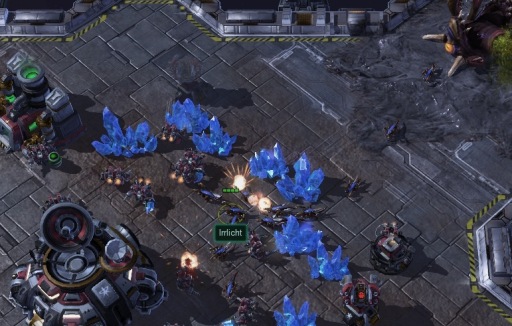 From a programmers view, SC2 also has some interesting technical features, like how the multiplayer and replay functionality works. Behind the scenes, it's obviously a simple deterministic state machine running the game, and only key and mouse input events are sent between players, making the multiplayer game work on even slow internet connections. Replays are saved in the same way. I always wondered if it is possible to play replays of old versions of SC2 at all, and how the programmers manage to let the state machine work with those old files when they changed lots of mechanisms and values in new versions. Yesterday I noticed that they don't: When you replay an old game, Starcraft will then launch the old binary .exe of your game, to play it back. 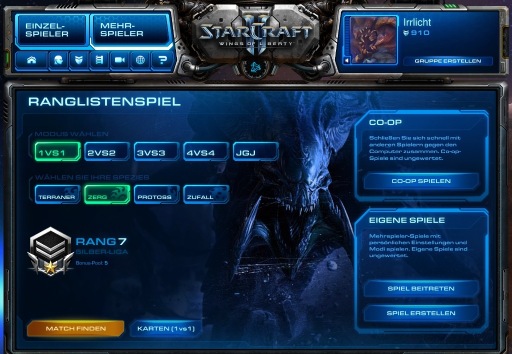 The only thing I don't like about this game is that I'm absolutely horrible at it. I'm quite ok when playing with other people (I'm platin in 3v3), but in normal, 1v1 matches, I absolutely suck. After playing it a few hours every week for one year, I'm still in the silver league. I know a few nice builds which work, I am able to macro up (I play zerg) and what unit compositions are useful against what kind of enemies. But I fail very often. Interestingly, this is what lets me keep playing the game, and try getting better.
I wonder what the reasons are for my failure. Being 32, I think maybe I'm maybe to old, and too slow for this game. Also, I've noticed that the strength of my opponents are different based on the day in the week and the time of day. On weekends, my opponents are usually unstoppable, although playing silver. When I play a match in the evening during the week, I have no problem defeating even gold or sometimes platin players. Maybe I'm playing at the wrong time. Or maybe I simply suck. :)

Anyway, it's a fun game, and I can recommend trying it out. Now back to programming. That's what I'm a bit better at. ;)

If you are willing to blame your age then it is your age. Come on NesTea is the most successful SC2 player right now and he's over 30.

I don't think at all that the best online games players are young. Especialy Starcraft, which has a huge fanbase worldwide must have MANY players that have played it for 5 or 10 years. I haven't played the game, but I can imagine that being experienced in Starcraft 1 may be helpful in Starcraft 2.
And in other online games I often meet persons over 30 (I'm 29), and those are mostly "better" players, skillwise and socialy.
And then there is the point that the most dedicated players are not students, but unemployed adults ;)
Telepath
Quote
2011-09-01 10:46:00

I've sucked at all competitive multiplayer games since about 8-10 years ago. Although that coincides with around the time I turned 30, it's not the age itself I think, it's just that I feel I have more enjoyable things to be doing than practicing a single game over and over again. Some people can maintain their super-competitiveness in games so age isn't a barrier (barring inevitable slowing of reflexes - sad but unavoidable), but to me as I aged it just started to feel a bit pointless. There are plenty of challenges out there to tackle which have more satisfying outcomes than beating someone at a game - for me gaming is just a fun distraction :)
Steve
Quote
2011-09-01 12:42:00

The fact that you say you are able to macro up, like this is easy, is most likely why you are failing.

I'm only a couple of leagues above you but after taking lessons from masters players, if you miss one larvae inject, your macro is not perfect... If your queen's have over 50 energy, you should have lost against someone better and you are probably floating minerals..

You can use excuses like, well I want to keep it casual or I don't want to practice I have better things to do.. but really this is who belongs in silver/bronze. People get to higher leagues because they don't miss that inject or they don't float that extra 500 minerals.

I really like to watch sc2 games but I'm not really into playing them.
The reason for me is I think that doing competitive play really stresses me - it certainly is not relaxing... while not producing anti-stress hormones as you do if you do real sports.
If I do real sports I feel more relaxed and better than before doing it (if it is exhausting: No table-tennis).
Suffice to say I want my free time to relax not to induce further stress.
tobias3
Quote
2011-09-03 00:52:00