I'm currently working on unifying the lighting system in CopperCube. Basically, there is a lot of code in it to create lighting in that editor: Static lighting from the lightmap generator and lots of different dynamic lighting implementations for D3D8, D3D9, OpenGL, WebGL and Flash Molehill/Stage3D. While I was ensuring that all of them work and look exactly the same, I also adjusted the lighting method a bit, resulting in the ability to fine tune the lighting quite a bit. 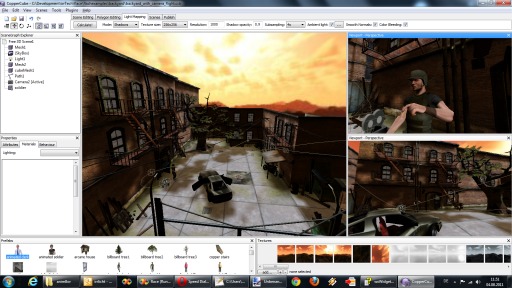 After that, I tweaked the backyard demo scene with the new lighting, and the result was the image above. Pretty nice, I'd say. Looks much more realistic now. But there's still some work to do, for example it looks like I have a bug with the ambient light in the WebGL shader.

All this will be in the next update of CopperCube. If you would like to get a mail once this new version of CopperCube is released, subscribe to the Ambiera Newsletter:

Would there be any chance of getting a link to a larger image, the one up currently is very difficult to make anything out. But what I can see so far, looks outstanding.
omgitsalexl
Quote
2011-08-06 22:39:00