A random list of 3D engines with mobile support

Tim Preuß from Appcellent just mailed me a photo he took from the developer conference 'mobile Dev Con'. The image shows a slide with the title 'Choosing the right Cross Platform Strategy'. It shows various products supporting cross-platform development, like the widget library QT, the mobile C++ lib moSync, and other stuff I don't recognize. But included in that list are also four 3D game engines (or logos of their developers): 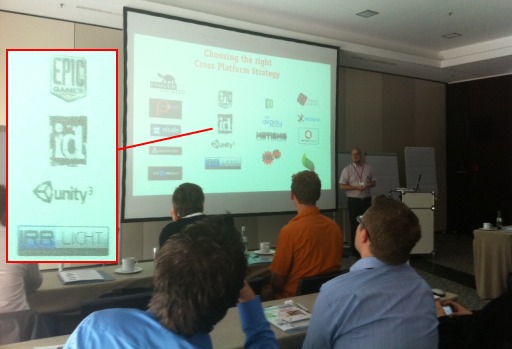 We have support for opengl-es and software renderer, so almost all recent mobile platforms with an open development program. Consoles would require some more porting, even though some results have been shown in the past as well.
hybrid
Quote
2011-07-29 23:14:00

@hybrid : well you should make that clearer, because on the features page and the website there is no mention of it.

I also like the selection. Irrlicht deserves to be mantion next to Unreal, Unity and id tech.
A Serious Person said that Irrlicht is not a game engine. This is debatable. You get collision, user input handling and graphics (including GUI) what more do you need?
pubesz
Quote
2011-07-31 14:28:00