When looking at the following image, do you spot something unusual in there? 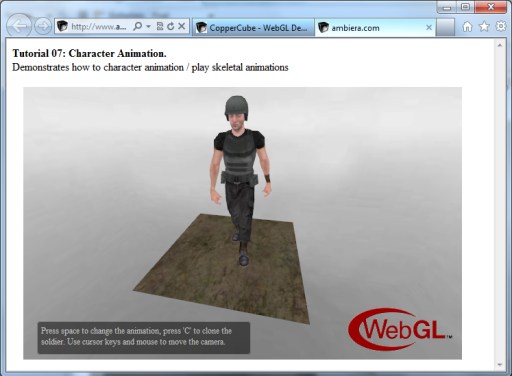 Correct: It's the Internet Explorer. And it is running a WebGL application, specifically one of the WebGL demos from the CopperLicht WebGL library. How is this possible? Didn't Microsoft recently tell us that they won't support WebGL and go with their own developed Silverlight instead?

Yes, they did. But now, there is IEWebGL. A plugin for Internet Explorer, which makes WebGL available also in that browser. For you as developer of the WebGL app, you don't have to change anything in your code. Basically only include some additional JavaScript file which will do most of the work for you.

IEWebGL is still in beta, but it is already usable. All CopperLicht demos and everything created with the WebGL editor CopperCube for example seem to work flawlessly. (Well, except for keyboard input currently which is a small missing feature in CopperLicht itself and should be fixed soon). If you are developing a WebGL application, simply add IEWebGL to your site and it should run on every browser then. This is a big game changer, in my opinion. Can't wait for IEWebGL to get out of beta.

Awesome work. What about migrating this plugin into the IE9 core and solving MicroSoft's whole WebGL problem?
Lindsay Kay
Quote
2011-06-30 23:45:00

Even if Microsoft will deside to implement WebGL in IE11, there still be users with previous browser versions for years, so we don't even think about going away.

VERY COOL, but what about the speed, can't imagine it got the same speed as native webgl, are there statistics yet comparing between native webgl and this plugin?
flexxcode
Quote
2011-07-08 18:04:00