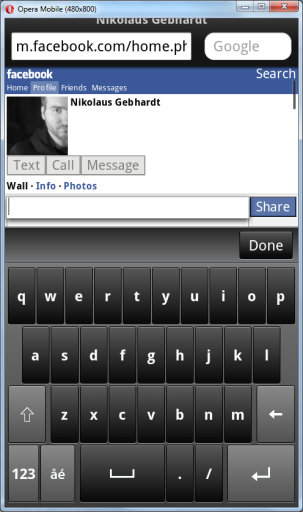 Opera just released their Mobile Emulator for free. It emulates their mobile Opera browser on a Windows, Linux or Mac OS X PC, for multiple devices, like the Samsung Galaxy, HTC Wildfire / Desire / Hero / etc, LG Optimus One, Motorola Xoom and numerous others. I just tried it out, and it works great. Quite a simple way to test how your websites will look like on those devices. I think it is a must-have for web developers.

Apparently, there is also a way to make it run with Opera Dragonfly, their web debugger which recently also reached version 1.0. I haven't tried it out yet in combination with the emulator, but also Dragonfly kicks ass. Unfortunately, I've recently got used to the integrated debugger in Google Chrome which does basically the same, but somehow appears to be a bit faster. I think the reason is that in Chrome, the debugger is written in C++, while in Opera, the Dragonfly frontend (at least) is done using JavaScript and feels a bit slower. But still, Dragonfly has a few features which are missing in Chrome, so I might switch back again.

Anyway, try the Opera Mobile Emulator, it's great. Hm, do I have to create a mobile version of all my websites now? :)