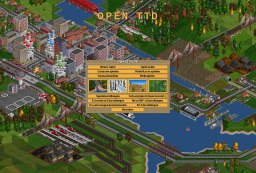 I recently downloaded OpenTTD, an open source re-implementation of the classic Transport Tycoon from 1994 and tried playing it. And I must say: Wow! I'm absolutely impressed.

OpenTTD previously was just a reimplementation of the game which needed the orignal game graphics and sound files. This has changed now, it now comes with it's own independent art set, which looks and sounds great. The game still is the same simulation game as known from 1994, every detail is there and you can start creating your own company by building trains, busses, airports etc. But OpenTTD includes now so many (optional) new features, it's quite impressive. The map can be made extremely big and customized, the game includes a multiplayer mode, and there are countless more options to influence gameplay.
One thing I initially didn't see: OpenTTD has several AIs to choose from and against which you can play. Unfortunately, you need to choose some AI implementations to be downloaded from the Web in the options menu before starting a game, which I didn't see initially. But once you got it, the game is quite fun.

Interesting side fact: Although you will have running dozens of trains and hundreds of busses in your world sometime, the game only needs a tiny fraction of your CPU speed to run. Probably a nice side-effect of the old architecture of the game, which ran smoothly back then on my Pentium 60.

I've followed this clone since long long long time ago. And it has become a very complete game, specially with 32bit graphics.

And after all it still has the original spirit. It is a great game!

Fantastic game; Slowly starting to put as many hours into Minecraft as I did with this back when I was growing up - For some reason I still prefer the original graphics used in the first Transport Tycoon game - Not sure what Chris was playing at with the delux graphics; Best feature of all is the fast forward :-D. Also feels good to cause the competitors trains to have "accidents" hehe :-D.
Chris
Quote
2010-11-12 12:53:00