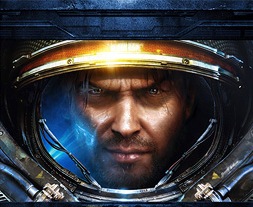 I recently played through the (quite short) single player campaign of Starcraft II and also finished quite a lot of multiplayer matches, so here is my usual small review of this game:

I loved the game back in 1998 and from what I remember, the new game is quite the same. Everything works as before down to the short cuts, but now it's in (pretty unnecessary) 3D. But anyway, it is still fun. You get to view some - interestingly - rendered in realtime 3d movie sequences between each single player mission and the mission design is also very ok. But nothing you've not seen before in any other up-to-date RTS game. The necessarity to connect to Battle.NET in order to play the game - together with that fact that half of Battle.Net regularily doesn't fully work (for example I cannot see portraits of the players half of the time at all) - is a bit nerving, but I guess this is how games are today. I am also not entirely sure what all the multiplayer ladder stuff is about (for example: What does that number mean next to my character? What does 'Gold league' mean? How do the scores work? etc.), it is not easy to find this out because the manual mainly only contains a printed version of the background story (wtf).
But apart from all this, it is a fun game worth buying and I think I will spend some more time in multiplayer matches in the near future.

Only addition seems to be graphics. Then first part is lot better due to quite long campaign with expansion packs, same gameplay, and easily playable offline for single player. And multiplayer matches are also easily available for SC1. Well the HD era of games :) But I agree that SC2 is sufficiently good to buy and probably expansion packs and no-cd official patches will come later on, Blizard being Blizard.
kinjalkishor
Quote
2010-08-27 17:59:00

offline matches against computer opponents or the "Skirmish" mode is present or not, once we are connected to battle.net or authenticated. I like those skirmish matches in strategy games a lot.
kinjalkishor
Quote
2010-09-01 09:29:00