Internet Explorer is dead for Developers

Since all people are recently talking about the death and rise of various browsers, I wanted to take a look at the statistics myself. I run various websites with different audiences, reaching from gamers over programmers to the average non-tech-savy internet user. Taking a look at my various sites and stats, the most interesting were these two: 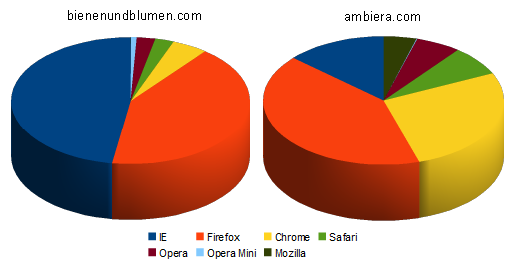 While Bienen und Blumen is a middle sized german dating website with users who in most cases don't even know what the word 'browser' means, Ambiera is a website visited by highly tech savy people developing software themselves.
And as you can see, about half of the visitors of the dating page are using a version of Internet Explorer (47%) while only about every tenth visitor on the developer site is using it (13%). So, developers are obviously preferring alternative browsers such as Firefox and Chrome.

I also didn't know that Chrome already had a that big market share, even on the non-developer site. And, interestingly, the 7th most used browser on these sites is Opera Mini, the Opera edition for mobile phones and similar. Didn't know that mobile browsing is that popular already.

Here are the detailed values, if you are interested:

a probably not well-founded conclusion from the numbers: Geeks using FireFox apparently are in need of dating services. ;-)
xaos
Quote
2010-06-09 15:13:00