Starting to port a huge application to Mac OS X

Since I added OpenGL drawing to my local build of CopperCube recently, it would probably be a good idea to try to make it run on Mac OS X. So I imported the source into XCode and after I made a few tweaks here and there, the result was this: 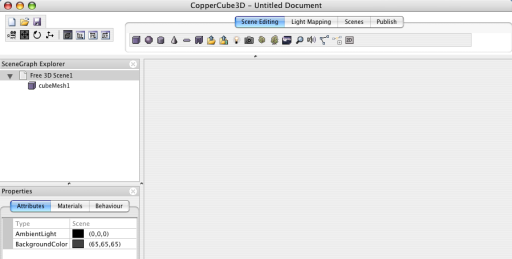 Not too impressive, but with some few missing parts, CopperCube now basically runs on Mac OS X. Not least thanks to wxWidgets the cross-platform UI library used by CopperCube and Irrlicht, of course. A lot of parts are still missing which I simply commented out, so it should be still quite a lot of work to make it 100% functional, but for a start, this is great.

The most apparent missing feature is obviously the 3D rendering, which is not even visible. Making Irrlicht work together with wxWidgets in MacOS via AGL/CGL will be the next step to do.

I guess you meant irrEdit which is using wxWidgets. The external Window parameter on startup also works under OSX, but IIRC not the beginScene parameter.
hybrid
Quote
2010-04-03 16:57:00