Although CopperCube uses Irrlicht for rendering 3d graphics, I only made the D3D8, D3D9 and Software Renderer available in it. The reason for this is that CopperCube uses an older, highly modified Irrlicht version internally and back then, the OpenGL driver wasn't able to render into existing windows. More and more new features were added to the supported drivers, and it became more difficult to support OpenGL as well. But recently, I sat down and started backporting everything into OpenGL, and on my local build it seems to work already: 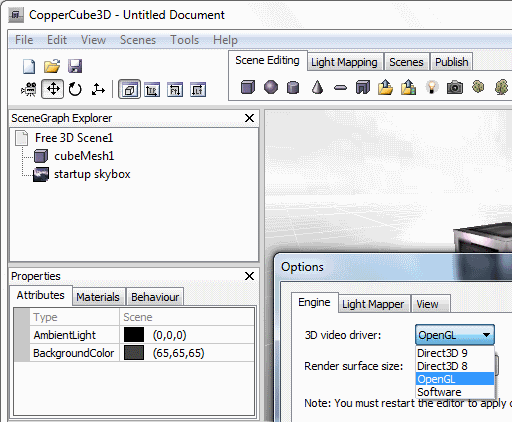 The great thing about this is that not only people who complained in the last years that irrEdit doesn't work under Linux using Wine, this will probably change once this feature is ready. Also, with OpenGL working in CopperCube, this will mean that I can port it to other operating systems such as Mac OS or Linux.

No matter what others say, I think it is still interesting and useful maybe necessary to improve some minor things
silversrt
Quote
2010-03-28 06:59:00

Nice work on your phisics engin still trying to learn how you did a few things . It has given me a few directions to take for my own physics engine . I have not seen to many people support directX and opengl in there game engines so nice work on that .
bravo2zero
Quote
2010-05-09 05:51:00