I just released the first version of CopperLicht, a new 3D engine implemented completely in JavaScript. It runs entirely in the browser and uses WebGL. (WebGL is a new 3d drawing API which is supposed to be supported in the next generation of web browsers.) Doesn't sound too awesome maybe, but look what CopperLicht can do: 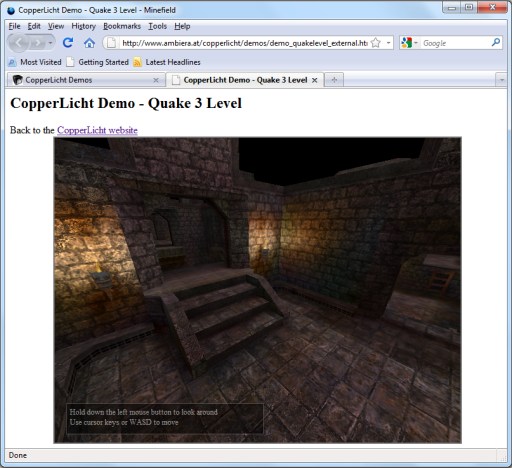 Basically, it is pretty fast and can render huge maps like here a full quake 3 level in playable speeds. (If you notice, this one is the quake map from the Irrlicht SDK). You can try out the demo yourself here.

CopperLicht is free to use. You can use CopperCube as world editor, so you can edit your worlds in 3d and write your game with CopperLicht. The API of CopperLicht is pretty easy to understand, and if you ever tried out Irrlicht, you'll notice that those are very similar. The SceneGraph and Material API is nearly the same, and loading textures and extending the engine works very similar as in Irrlicht.

CopperCube has been released in a new version as well now, it now also supports publishing its 3D scenes as WebGL, using CopperLicht of course.

This is the first release of CopperLicht, and it's an alpha version, so if you have any suggestions, comments, feature requests and similar, please don't hesitate. :)

Very nice work there niko, i could run it for some reason it would say loading for a sec and then nothing.. and i would like to add on facebook but i try to keep my facebook absolutely free of my professional life.. i would recommend and request you to make a twitter account, its a very good platform to tell the world about all your minor progress.. you cant report every minor issue on a blog but you can on twitter..
Rapchik
Quote
2010-02-05 20:50:00

Your productivity is incredible, but your creativity when it comes to product names has ceased ;-) Tried with Minefield on OSX, doesn't work, looking forward to testing with the fix.
matt
Quote
2010-02-06 19:34:00

Still doesn't seem to be working. I get:

And now, what about IrrCube? ;D

Impressive! Although my first attempts to getting it run in Chromium under ubuntu Karmic failed ("GraphicsContext3D: glXChooseFBConfig failed"), your announcement and the ambiera website seems sufficient to me to say that this project has an exciting potential, maybe in the long run even more than the Flash version.
I'm originally a desktop 3D developer and have just jumped on the webapp train lately, so I'll closely watch your project's development and wish you all the best :-)
Geoffrey
Quote
2010-02-09 20:57:00